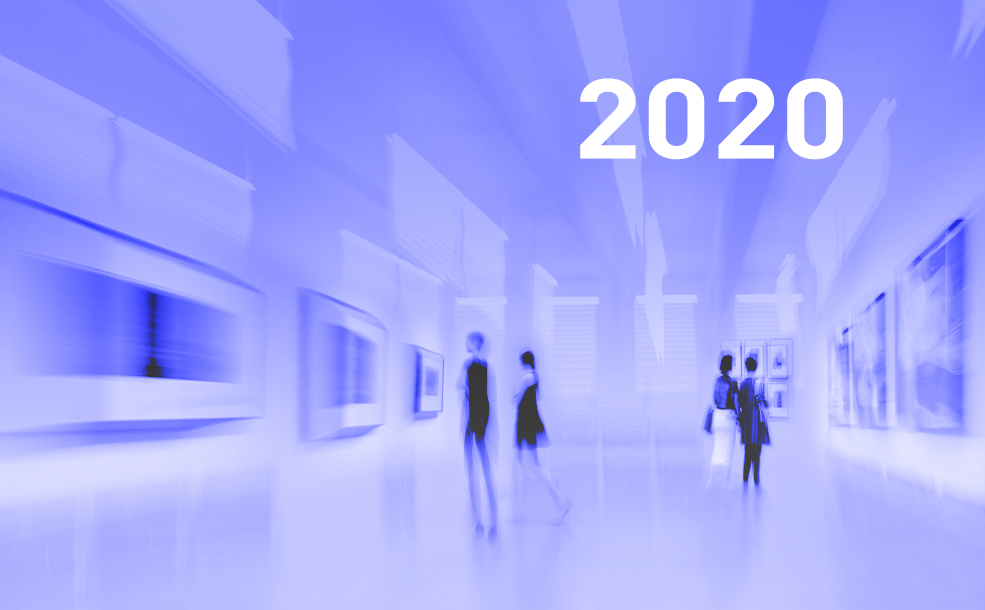 Instead of our usual monthly creative round-up we’ve taken a look at what’s coming up in 2020. Big events this year of course include the Tokyo Olympics and US presidential elections but there’s plenty to look forward to in the spheres of art and design too.

Tokyo Museum of Contemporary Art is hosting “Tokyo 2020 Official Art Posters Exhibition” featuring the work of graphic designers, photographers and artists who have created 20 posters showcasing a range of Japanese culture for the Olympic and Paralympic Games. Each Games creates posters to promote cultural and sporting understanding and Tokyo 2020 artists include Chris Ofili, Naoli Urasawa, Whilippe Weisbecker and Viviane Sassen.

George Him: A Polish Designer for Mid-Century Britain

Jerzy Himmelfarb was an acclaimed graphic designer in his native Poland and later Germany, before moving to London in 1937 where he stayed for the duration of the Second World War and changed his name to George Him. This exhibition at House of Illustration in London includes wartime propaganda posters, packaging design and children’s illustration. Curator Olivia Ahmad explains “He was influential as an advocate for the value of graphic design as a creative practice and a way to connect to people”. Runs from 31 January – 10 May.

We Will Walk: Art and Resistance from the American South

The first exhibition of its kind in the UK reveals a little-known history shaped by the Civil Rights period in the 1950s and 60s. Bringing together sculptural assemblages, paintings and quilts by more than 20 African American artists from Alabama and surrounding states, the artists represented in the exhibition lived through the Civil Rights struggle and its aftermath, often in conditions of poverty. The exhibition also features Civil Rights music and documentary photographs. At the Turner Contemporary, Margate, 7 February – 3 May.

Steve McQueen is the only person to have won an Oscar and the Turner Prize. Over the last 25 years he has created some of the most innovative works of moving image designed for gallery spaces and has also directed four critically acclaimed feature films, including the Academy Award-winning 12 Years a Slave. This exhibition spans two decades of his career and reveals how his pioneering approaches to filmmaking have expanded the ways in which artists work with the medium. Tate Modern 13 February – 11 May.

Also at Tate Modern, this major retrospective will include Warhol’s iconic pop images of Marilyn Monroe, Coca-Cola and Campbell’s soup cans as well as works never seen before in the UK. The son of immigrants who became an American icon, Warhol was an artist who embraced consumerism, celebrity and counter-culture – and changed modern art in the process. From 12 March – 6 September.

A once in a lifetime exhibition of the greatest mythological paintings ever created. In 1551, Prince Philip of Spain, the future King Philip II, commissioned Titian, the most famous painter in Europe, to produce a group of paintings showing Classical myths primarily taken from the Roman poet Ovid’s ‘Metamorphoses’. The exhibition reunites all six paintings in the series for the first time in over four centuries. The National Gallery, London, 16 March – 14 June.

To mark the 50th anniversary of the Serpentine Galleries in London’s Hyde Park, fifty leading creatives have been invited to propose artworks and projects in response to the climate emergency. Dates tbc.

Politics, identity and social media are all likely to feature strongly in this latest instalment of the biggest touring exhibition of contemporary art in the UK, providing an overview of the most exciting art produced in this country during the last five years. Opening in September at Manchester Art Gallery and then touring to Wolverhampton, Aberdeen and Plymouth.

“Edvard Munch’s mother died when he was very young so I want to give him a mother” says Tracey Emin. Her 15 tonne, 9 metre high statue will be cast in bronze and unveiled in the spring when the new Munch Museum opens at Oslo Harbour, on the very fjord depicted in the artist’s famous painting, The Scream. Emin won an international competition to find a public artwork for Oslo’s Museum Island. The opening exhibition at the Munch Museum will include her work alongside that of Munch, and will then tour to London’s Royal Academy.