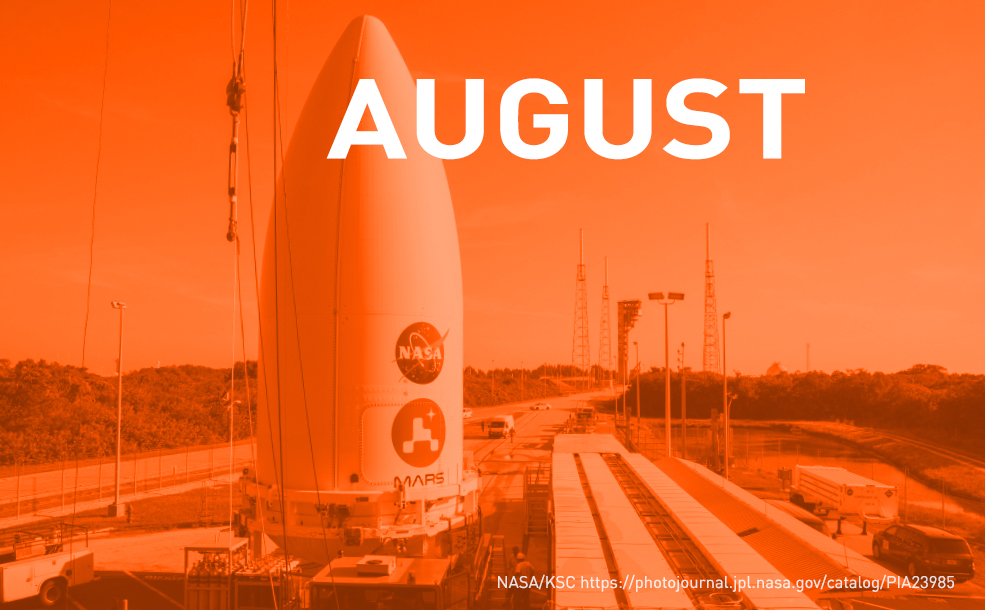 House of van Schneider have created a slick visual identity for NASA’s Perseverance robotic rover launched on 30 July on a quest to find evidence of past life on Mars. Following the current flat logo design trend adopted by many design studios, the new logo condenses the red planet, Earth and the rover into three simple, flat shapes. A red colour block circle represents Mars, a white geometric form represents the rover and a white star represents Earth from Mars. The simple design can be applied successfully in all sizes across digital platforms as well as physical formats including the rover itself, its 58m high rocket ship and associated NASA merchandise. Respect to House of van Schneider – there aren’t many design studios who can claim to have their work sent into space!

Fresh new branding for Holsten beer has been created by Design Bridge to appeal to a more youthful demographic. Founded in 1879 and now owned by the Carlsberg Group, the Hamburg-based brewery has a rich history. The iconic knight statue on top of their brewery tower is at the heart of the new identity, which had become lost due to an ‘over-polished, mass-produced design approach’. A beautiful teal shade has also been introduced to the colour palette, reflecting the oxidised copper of the statue itself. The aim was to appeal to a contemporary market without alienating the existing loyal customer base and brewery workers were surveyed as a reliable guide to the right level of change. Cheers to that, or as they say in Hamburg, Prost!

Twenty new titles have been added to Penguin’s Great Ideas series, 25 years after its initial launch. Many have been created by the original designer, David Pearson. New titles in the pocket-sized non-fiction series which focuses on great thinkers and philosophers include works by Simone de Beauvoir, Audre Lorde, Oscar Wilde and leaders of the Suffragette movement. The latest editions follow the same rules as the previous titles, with a limited colour palette of black, white and blue, but with an amazing variety of covers which react with the content of the books in different ways. Some employ a straightforward typographical treatment mimicking newsprint and protest posters, others are inspired by graffiti and intricate filigree styles, while others take a more abstract approach. We think they are very lovely indeed.

The world’s first online encyclopedia of plastic-free materials has been designed by London-based studio Made Thought in collaboration with IBM and environmental campaign group, A Plastic Planet. The database, entitled Plastic Free, aims to bridge the gap between manufacturers of sustainable materials and packaging and product designers who want to reduce the use of single-use plastic. The project is set to go live in spring 2021 and according to A Plastic Planet co-founder, Sian Sutherland, will constitute a ‘trusted, extensive, unbiased source’. What a valuable resource this will be for both designers and manufacturers.

London illustrator, Vic Lee, documents his lockdown experience in a graphic diary. The hand-drawn Corona Diary includes personal, national and global events during the first six months of the pandemic and changed from a personal project to a self-published printed book after Lee put a 30-second film onto LinkedIn which was viewed 250,000 times, gained over 12,000 likes and many comments urging him to publish it. His recent works have been large-scale hand-drawn murals but this latest project was an extension of the illustrated diaries he has created when travelling in order to record his experiences. Working on the Corona Diary was therapeutic and helped him to understand what was going on around him as the pandemic unfolded. The first edition sold out in seven weeks and he has also gifted copies to local key workers. We think it is a truly incredible record of the unprecedented times we have all lived through over the last few months.

Centaur Robotics are offering an alternative to the traditional wheelchair which will enhance the mobility of older people. Named the Centaur and developed by company design director Paul Campbell, the chair was inspired by company founder and chairman, David Rajan, who’s son was born with cerebral palsy. The new wheelchair design is functional, aesthetically pleasing and affordable, with two wheels only, a lifting column which allows it to be raised and lowered and easy-to-use intelligent software. With a focus on dignity and elegance, Campbell, who has a background in car design, wants the chair to enhance users’ lives and be viewed with the same enthusiasm as a new car. We certainly think he has succeeded in this mission.

The industrial designer, James Dyson and his wife Deirdre, who is an artist and carpet designer are also avid art collectors. They plan to open a public exhibition space in the grounds of their Cotswold home which will display their modern art collection. Designed by architects Wilkinson Eyre, who have worked on previous Dyson corporate projects, the building will be called the Dodington Gallery, after the estate in which the family live and is due to open in 2021. Sustainability is at the heart of the project which will consist of a low-rise building with a sedum- planted roof. Works in the collection include sculpture and paintings by celebrated artists including Roy Lichtenstein and David Hockney and there will be free entry to the gallery with priority given to local residents. We look forward to visiting once it opens next year.