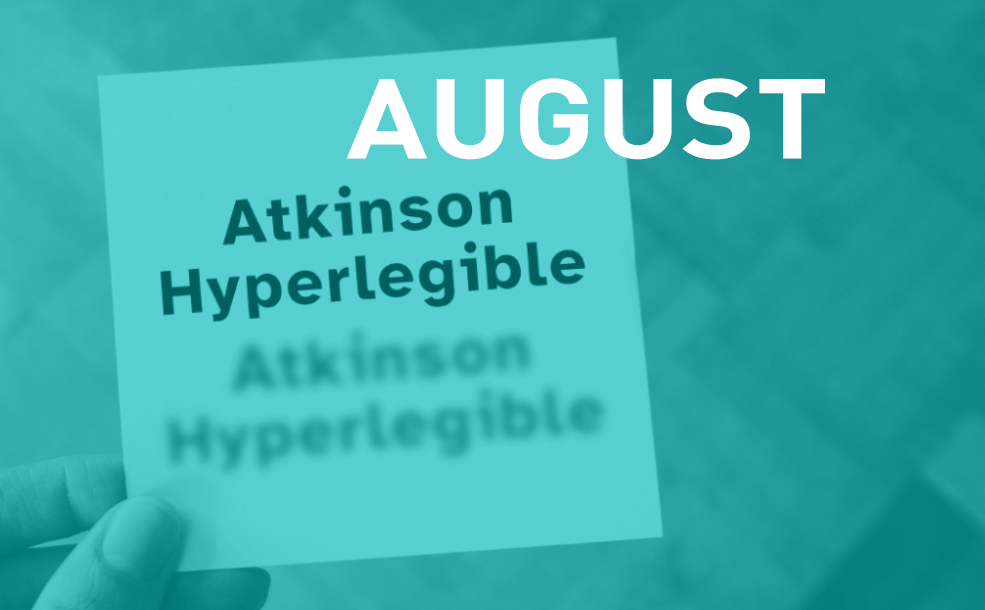 New typeface for the visually impaired

The Braille Institute of America (BIA) has just been rebranded by Applied Design but struggled to find a typeface that was both ‘extremely legible’ as well as stylistically appropriate for the organisation’s new look. In response, together with an awareness of the growing number of visually impaired people globally, they developed a new typeface for the project – Atkinson Hyperlegible. Named after BIA founder, J. Robert Atkinson, the modernist style sans serif typeface achieves the perfect balance between aesthetics and practicality. BIA have made it available to all and it is free to download on Google Fonts.

The iconic soup brand immortalised by Andy Warhol in the 1960’s has been redesigned for the first time in 50 years by Turner Duckworth. The new look aims to attract new audiences to the brand originally founded in 1869 by Joseph A. Campbell. The famous Campbell’s wordmark, based on the founder’s signature, has been redrawn with the previously joined-up letters now decoupled. This sits at the centre of the new packaging, with updated gold fleur-de-lis stamps and familiar red and white split background retained. The label is designed to be more consistent throughout the range and a new suite of supporting visual imagery has been introduced featuring a broader, food-inspired secondary colour palette.

Ten new artworks by the anonymous street artist popped up in August across coastal towns in Norfolk and Suffolk which satirise the idea of staycations in the wake of Covid-19 and Brexit travel restrictions. A short film posted on Instagram shows the artist driving around in an ageing camper van and painting his signature stencilled murals which include a giant seagull swooping over a skip, children on a sea adventure, the metal claw of an arcade game descending over a bench and a couple dancing on top of a bus shelter. Local councils have worked to protect the murals which have attracted much attention and added a witty cultural element to the tourist attractions already on offer in these areas.

A candleholder created by Swedish designer Lena Bergström is the world’s first object using steel produced without creating carbon emissions. Swedish steelmaker SSAB produced the first fossil-free batch of steel alloy and intends to convert its factory in Oxelösund, Sweden to fossil-free production in 2025 and begin commercial production in 2026. CEO Martin Lindqvist says the breakthrough will ‘significantly reduce the carbon footprint of the steel industry’ and car maker Volvo will also be using the steel which is produced in a blast furnace heated by ‘green’ hydrogen rather than coal and coke.

Ahead of its new Landmark series which will delve into the purpose and power of public art, Sky Arts have surveyed the British public and revealed the nation’s favourite to be Ray Lonsdale’s 1101, also known as Tommy, situated in Seaham, County Durham. The 1.2 tonne metal sculpture of a soldier which marks the first minute of peace after the 11am Armistice on November 11, 1918 was originally meant to be temporary but became so popular that a local fundraising campaign ensured it is now a permanent installation. Also in the top five are Andy Scott’s Kelpies, a giant horse installation in Falkirk, Scotland; the Uffington White Horse, a chalk hill figure in Oxfordshire; Antony Gormley’s Angel of the North and Martin Jennings’ Women of Steel in Sheffield. The show airs weekly from September 6.

We seem to have a public art theme going on this month and last but not least is an art trail which constitutes a global celebration of African lions and the communities who live alongside them. From 10 August to 24 September in London, Bristol and Edinburgh in the UK, The Hamptons in the US, Wellington, New Zealand, Nairobi, Kenya and Sydney, Australia, 47 unique, life-sized lion sculptures designed and made by leading artists, musicians and sportspeople will be on public display and highlight the threats faced by the ‘King of Beasts’, after which they will be auctioned by Bonhams to raise conservation funds. London’s 27 artworks are on show in various landmarks around the city and physical and public maps are available to follow the trail.