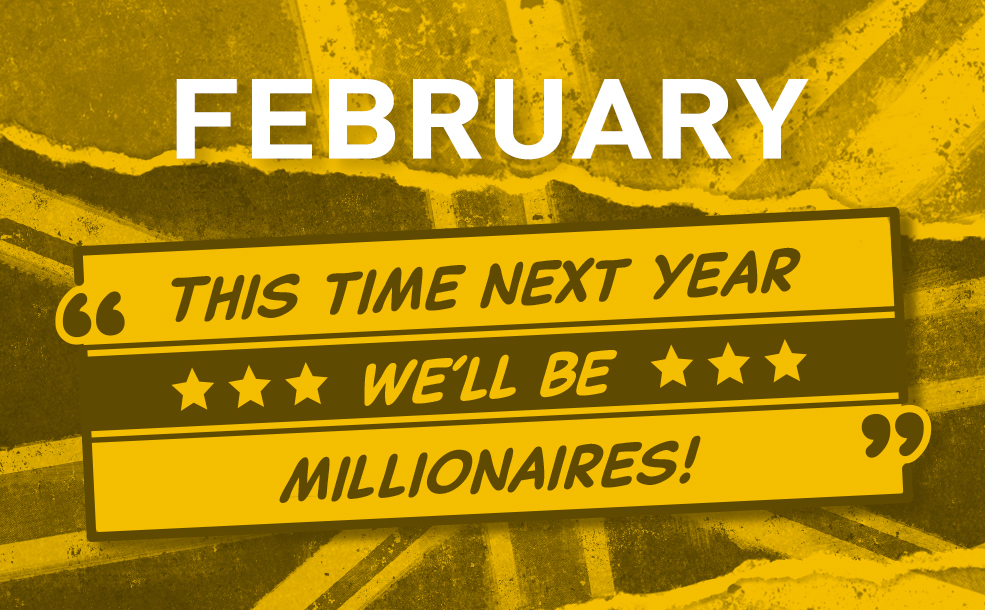 We need something to make us smile at the moment and BBC Studios in partnership with Royal Mail are featuring the classic sitcom on its 40th anniversary in a set of commemorative stamps. Eight stamps feature iconic Only Fools & Horses scenes and one-liners with four extra stamps depicting the main characters Del Boy, Rodney, Grandad and Uncle Albert and some of their best catchphrases. Did you know the phrase ‘lovely jubbly’ was invented by Del Boy and is now in the Oxford English Dictionary?! A Prestige Stamp Book written by series author Steve Clark is also available, featuring all twelve stamps with plenty of entertaining background info.

Creative agency Wide Eye have redesigned the White House logo to symbolise US President Joe Biden’s ‘desire to bring the country together’. The updated design which depicts the north façade of the building, is a more detailed and architectural version of the flat logo introduced during the Trump administration. The new logo is a blueprint-style line drawing motif, different versions of which are used in different scenarios including press releases, stationery, documents and pared back versions are more legible for digital use. Matching fonts, Mercury and Decimal, by New York type foundry Hoefler & Co. are carried over from Biden’s campaign and a revamped White House website was also launched after his inauguration.

Coca-Cola is trialling a new paper bottle made by Danish company Paboco (short for Paper Bottle Company) as part of a plan to move towards zero waste by 2030. The trial is a work in progress and features an extra strong paper shell with 100% recycled plastic enclosure and liner but the ultimate goal is to produce an entirely plastic-free solution. Paper-based packaging solutions are set to become a mainstay in this effort but one of the biggest challenges is to find one that can keep fizzy drinks fizzy!

And in a competition which also seeks to tackle the issue of plastic packaging waste, Innovate UK is offering £16 million for sustainable plastic packaging design solutions to support business-led projects. The competition brief states that projects entered must improve sustainability of the plastic supply chain, help deliver targets of the UK Plastic Pact, utilise innovation in design and technology and embed a whole-systems approach which considers environmental, economic and social factors.

Lack of funding for creative education

According to Steven Spier, Vice-Chancellor of Kingston University, in spite of the importance of creative industries to our economy, increasing lack of support for studying creative subjects is resulting in a reduction of young creative talent. He highlights a disconnect between the economic importance of creative industries and funding for creative education. A pre-pandemic estimate put the contribution of the creative industries at £11.7 billion gross value added to the national economy. Creative skills and our world-leading cultural sector will be instrumental in rebuilding the UK economy and Spier intends to start a campaign highlighting how continuing disincentives for schools and universities to offer creative subjects will impact this.

Branding agency Pearlfisher have redesigned McDonald’s packaging to reflect the ‘innate joy of the McDonald’s brand’. Bright, simple graphic designs and modern colours represent classic menu items. For some products such as the Big Mac, the illustration is a direct interpretation of the food inside while others are informed by the item’s most significant ingredients, so the Cheeseburger is simply a dripping yellow line, Egg McMuffin a single yellow circle indicating a yolk and Fillet of Fish is indicated by turquoise waves. Only the item name and the M logo sit alongside the new graphics. Simplicity was vital because of the need for universal recognition in different markets – a prime example of less is more!

The Ingenious team regularly scour design magazines and blogs for inspiration, information and the latest news and happenings. One of our favourites, Creative Boom, have helpfully compiled a list of their recommended blogs for 2021 which cover a whole range of subjects including graphics, branding, digital, product, art, architecture, interiors and much more, all of which support the creative community with news, ideas and inspirational writing about design and visual culture. Take a look www.creativeboom.com/inspiration/50-of-the-best-blogs-for-graphic-design-inspiration/

There are many reasons to look forward to Spring 2021 and one is The Art of Banksy exhibition which will run 25 March – 26 September in a 12,000 ft.sq. space in London’s Covent Garden. Curated by Chris Ford, international street art specialist, the exhibition will feature an array of works by the artist and political activist whose real identity has still never been publicly revealed. All artworks are on loan from private collections and include famous pieces such as Girl and Balloon, Rude Copper and Flower Thrower alongside works rarely seen.

We are also loving John Beard: 22 Vesalius, currently showing at Messums London and accessible as part of the gallery’s online programme of exhibitions and events. With works in major collections worldwide including the Tate and National Gallery of Australia, this is Beard’s first solo exhibition since 2013. Consisting of a series of self-portraits inspired by Andreas Vesalius, author of one of the most influential works on human anatomy, the monumental paintings are a mix of fine art and typography with numbers, letters and symbols overlaid on large painted heads to suggest facial features.