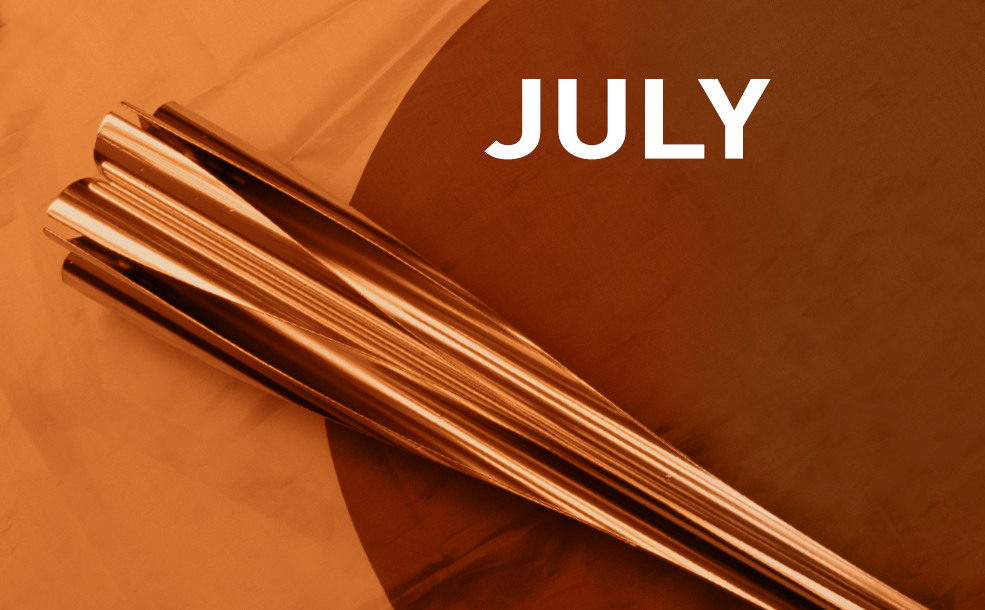 Design is a crucial aspect of every Olympics from stadium, opening ceremony, torches and cauldron, uniforms and medals through to logos, pictograms and mascots and there has been a particular emphasis on sustainability in design for the Tokyo Olympics.

The majority of venues hosting events already existed before the Games with some re-used from the 1964 Tokyo Olympics. Medals have been made from recycled electronic devices, podiums are formed from donated plastic and athletes are sleeping on recycled cardboard beds. Torches are made from recycled construction waste from temporary housing used after the 2011 earthquake and tsunami, the Olympic flame is fuelled by hydrogen instead of fossil gas and Toyota electric e-palette vehicles are being used to transport athletes around the Olympic village.

From LA to London, designers are helping energise urban life after a ‘lost year’ with a series of poster campaigns and digital work. Los Angeles has a new logo by Studio Number One and House Industries which is part of the city’s post-Covid comeback. The new design inspired by the city’s signage and typography, referencing famous buildings and featuring ‘sunburst yellow’ and ‘ocean-inspired teal’ aims to convey that LA is more than a city but a ‘whole mindset, a vibe, a culture’.

A design team from M&C Saatchi have worked on the GoGoSoho campaign in central London aiming to re-energise the area after a lack of footfall over lockdown. The identity uses a typeface based on street signs in the area with a colour palette of reds and urban greys. The minimal posters feature over twenty of the area’s locations and are displayed on the edge of the area to entice people back in. A similar venture in The Hague, Paard Push Forward, in collaboration with cultural venue Paard, also aims to promote popular culture in the local area. Designed by Studio Lennarts and De Bruijn, the campaign identity features triangle signs representing play and fast forward buttons in bright pinks, reds, greens and yellows. As Menno De Bruijn says ‘Everyone wants to start again, open again, party again’ and this translates into an ‘energetic, joyful, colourful and dynamic campaign.’

Established over 60 years ago, Visa has just refreshed its brand in collaboration with branding consultancy Mucho. The wordmark has been redrawn in a brighter blue and more dynamic form and has been separated from the tri-colour brand symbol to form two distinct assets. A new simplified primary colour palette of Visa blue and gold with black and white creates ‘optimised digital impact and dynamic physical presence’. New photography guidelines putting ‘everyday people in real places’ are intended to show the Visa ‘network at work’. Rolled out in conjunction with a new marketing campaign called ‘Meet Visa’ developed by Wieden+Kennedy, the update comes in anticipation of ‘the future of digital commerce’ and a cashless future.

Popularised by Californian surfers as a way to pass time when waves were low, skateboarding is making its Olympic debut in Tokyo. Creativity has always played a big part in skate culture and board design is a vital part of creating a cool brand and image.
GB company Clown, founded in 2000, have just made a come-back after 15 years. Design was embedded in their DNA from the start with Banksy crafting the original company logo and visuals for their first collection of boards.
According to Eric Gorvin, artistic director at Californian-based Girl skateboards, there are three main parameters for board design: graphics need to fit inside a skinny rectangle, feature the logo and encapsulate the ‘flavour of the brand’. His Don’t Trip series applies type treatments to boards that only make sense at a certain angle so that the type in lines like ‘Know Thyself’ and ‘Don’t Trip’ presents itself primarily as image.

Ohio based Latosha Stone’s skate brand Proper Gnar features in Beyoncé’s directory of black-owned business. The first black woman to start a skate company, this rarity is reflected in her designs. Stone felt the industry as a whole was directed at men and lacked any ‘feminine or cute stuff’. Her board designs feature pink shades, heart shapes and strong female anime characters and epitomise her vision where design can combine skating and diverse cultures.

The 2021 Cannes Lions International Festival of Creativity attracted over 29,000 entries from 90 countries. Fashion retail company H&M were the winner of the industry’s most prestigious prize with their in-store recycling system Looop installed at H&M Stockholm in October 2020.

In order to fight climate change, fashion has to change and one way to achieve this is to provide circular solutions. Looop is all about turning old garments into new ones, magically shredding old items of clothing and knitting new ready-to-wear designs from the old fibres. The technology was developed by Hong Kong Research Institute of Textiles and Apparel and will be widely licensed to help the entire industry become more circular – the start of a recycling revolution!

2022 will see Lego celebrate 90 years since it was founded in a Danish carpentry shop in 1932 and almost a century later it remains one of the most popular toys across the world. However, as Lego sets become increasingly elaborate, pieces can get mixed up and become a jumble of random bricks with instruction manuals long lost. Brickit is a new app available to download on the AppStore. It’s designed to scan random bricks, figure out what you can build and even tell you which bits are missing! It identifies the bits and provides illustrations similar to the original instruction manual.

A new exhibition at Tate Modern gives overdue recognition to Swiss artist Sophie Taeuber-Arp’s contribution to modern art and design. Dadaist, textile designer, teacher and dancer, Taeuber-Arp has a diverse and multi-disciplinary creative output combining traditional crafts with modernist abstraction which challenges the boundaries separating art and design and informed by her declared purpose to ‘brighten this world’. The exhibition runs until October 17.