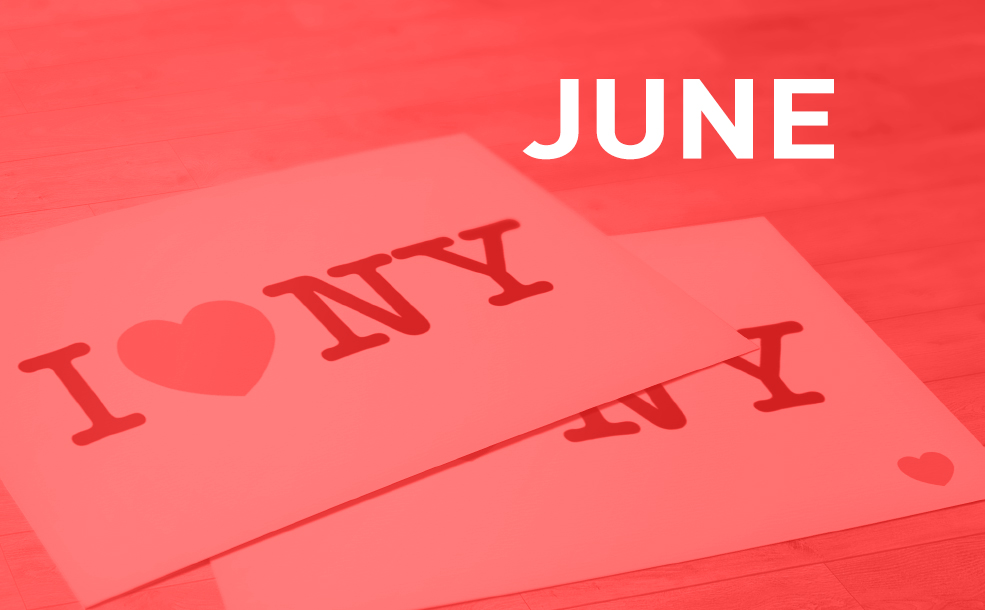 A key figure in the world of graphic design, Milton Glaser created the look of the 1960’s, with his trademark flowing lines, rainbow colours and strong patterns, as well as designing the iconic ‘I love NY’ logo in 1976 to help with regeneration of the city, and more recently he produced designs for the Mad Men TV series. He co-founded New York magazine in 1968, wrote and illustrated The Alphzeds, a children’s book with his wife, and was author of many essays including ’12 Steps on the Graphic Designer’s Road to Hell’. Glaser was an archetypal New Yorker, spending most of his life there, and his love of the human energy of the city’s streets carries through to his work. He had a ceaseless curiosity and energy, always stressing the importance of continuing to learn as well as possessing a strong sense of humanity and ethics. A big name who will be sorely missed.

Although the 50th year of Glastonbury was sadly cancelled, it is being celebrated online by the Victoria & Albert Museum, which highlights 50 glorious years of festival fashion, sounds, stages, history and memories with material from its official UK Glastonbury Archive. The 7-day virtual festival is the start of a larger database project which will map five decades of Glastonbury, with a focus on the role of designers as well as bands. It delves into the fashion of festival-goers from the early days of the 1970’s, punk and new age travellers to modern day festival styling, as well as that of performers including Stormzy, who last year donned a stab-proof vest designed by Banksy. Stage design also features, including evolution of the iconic Pyramid Stage, and nostalgic soundscapes have been produced by sound designer Gareth Fry. As well as drawing from its archives, the V&A is asking for contributions from previous attendees. Not quite the same as being there but perhaps the next best thing!

Winners of the 96th RSA student design awards have just been announced and according to RSA represent a “new generation of socially conscious designers”. This is the longest running competition of its kind and previous winners include the former Apple chief design officer, Jony Ives and former Nike head of innovation, Richard Clarke. A total of 9 briefs were set asking young creatives to tackle challenges including AI, community, circular fashion and refugee displacement. The results are impressive and include designs for a breast cancer detection app, a modern day launderette to help prolong the life of clothes and change throw-away attitudes to clothing, a flat-pack low-cost disposable incubator for newborns in Internally Displaced Person camps in Nigeria and a job-sharing scheme for mothers to make it easier to stay in the workplace. To find out more about these and other successful and inspiring projects, take a look at the RSA website.

Founded in 1840 in Connecticut, US, Yale now sells digital security products as well as traditional locks in 125 countries. It needed a new unified global brand to balance its heritage with modernity and GW+Co have given it a fantastic new graphic identity including refreshed logo, colour palette and bespoke typeface, even developing an avatar of founder, Linus Yale Jr. Yale’s new graphic system is based around the sun, a symbol of warmth and positivity, in contrast to the fear and negativity around security focused on by its competitors. The logo retains its signature yellow but has a higher contrast around the edge to emphasise the shape of the sun. The new colour palette is inspired by times of the day – sunrise, morning, afternoon and sunset and can be used flexibly across the identity, together with use of shadows to add depth. The avatar of Linus Yale Jr provides personality and is currently being used across internal comms.

The Big Issue is back

The Big Issue has set out a plan for its vendors’ safe return to selling the weekly magazine on UK streets, including the provision of PPE, contactless card payment equipment and stringent health and safety measures in distribution offices. The Big Issue, which offers homeless and vulnerably housed people across the UK a means of earning a legitimate income, took the decision to safeguard its vendors and the public by asking them to stop selling on the streets on 20 March. Following the recent easing of government restrictions, the network of 2000+ vendors will return next week. Like so many charities, the organisation rapidly innovated during lockdown to provide readers with alternative ways of purchasing the magazine and support vendors while they were unable to earn an income. This included an urgent appeal asking the public for donations and subscriptions. We are looking forward to seeing our local sellers back on the street!

Photographer Rankin has taken a series of 12 pro bono staff portraits to celebrate NHS England’s upcoming 72nd anniversary. The photos are to be shown on billboards, bus stops and other advertising locations around the UK and are published alongside detailed written accounts of the experiences of each NHS employee. The stripped back shots show a range of frontline workers against plain backgrounds, without facemasks, aiming to reveal the personalities behind the PPE. The process involved building a safe environment for the shoots which was vital to the photographer’s creative approach. Rankin came up with the idea for the project in response to feeling ‘powerless’ and wanting to show support for frontline workers putting their lives at risk. He said that meeting his subjects was ‘incredibly humbling’ and that ‘they truly are heroes, though none would ever say so.’ The works have been donated in perpetuity to the NHS as a legacy of this time.