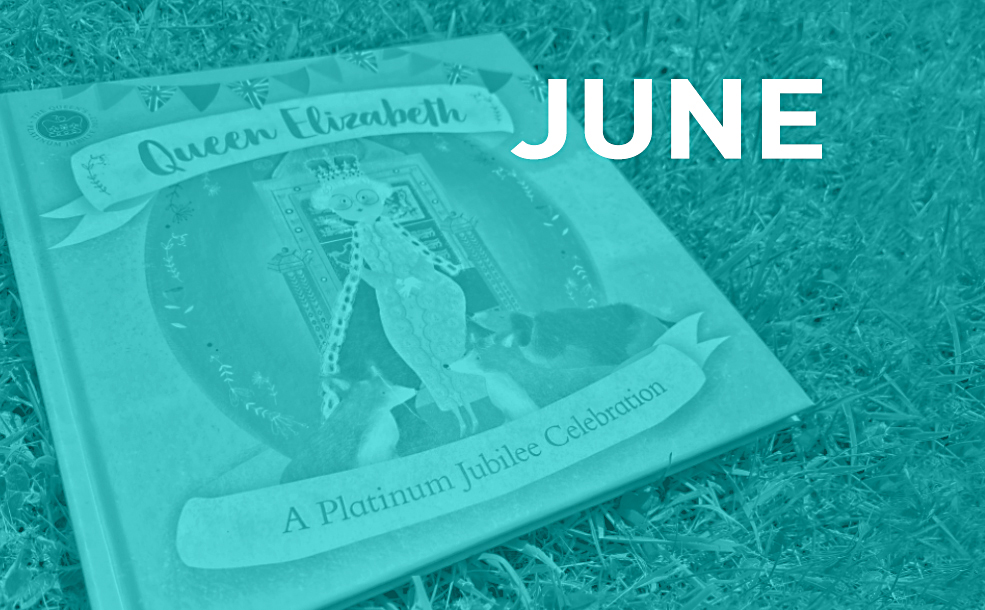 As always, there’s been no shortage of interesting design and branding news over the last month! Here’s a selection of items and happenings that have caught the eyes of the Ingenious team over the last few weeks…

Ingenious creative director Glenn’s daughter was one of many primary school children to bring home a free copy of the official celebratory book about the Queen in honour of her Platinum Jubilee.

An expert creative team at publishers Dorling Kindersley collaborated with educators and history experts from across the UK and Commonwealth, working closely with the Department for Education and Royal Collection Trust, to put together the ultimate children’s guide to Queen Elizabeth and her reign.

The beautiful book is packed full of fascinating info and charming illustrations and tracks British history through the memories of great granny Joyce. When Isabella, her great granddaughter arrives, she discovers a treasure box of Joyce’s keepsakes that prompt descriptions of the lives of inspiring people, important art, design and cultural achievements and landmark innovations and inventions – all highlights of Queen Elizabeth II’s 70-year reign.

The book was sent out to every state primary school pupil and is now available to buy – the perfect Jubilee souvenir!

We love our Nespresso coffee machine here at Ingenious and were pleased to hear the company has teamed up with sustainable trainer brand Zeta. After a year of research following the setting of a challenge to transform coffee grounds into trainers, the RE:GROUND trainer has been released, make from 80% recycled and revalorised materials, it integrates Nespresso coffee grounds in a vegan coffee leather as well as in its inner and outer soles. The trainer is available in limited stocks in three coffee-themed colours: Latte, Cappucino and Ristretto.

You will be aware the first Glastonbury festival since 2019 has just ended but did you know the 900-acre site at Worthy Farm was covered with 17,000 hand-painted rubbish bins?! Not your standard plastic wheelies but 45-gallon oil drums all decorated with bespoke designs. Festival organiser, Michael Eavis came up with the idea back in the 80’s and since then the bins have become an icon of the festival, adding yet another layer to the rich visual decoration and a ‘key part of the set design’.

The bins are painted by two groups: a team of approximately ten paid professional artists who live on site and work for ten weeks, and a group of eighty volunteers who also work and live on site for three weeks in exchange for a festival ticket. The teams are made up from a mixture of creatives, illustrators and designers taking a break from commercial work as well as first time painters. The oil drums are stored away after each festival and when they come out again the following year, are scraped down, given a base coat and a new layer or artwork before being distributed by tractor around the site.

Look out for a colourful set of stamps designed by London-based studio NB with queer British artist Sophie Birkin. The central theme A March Through Time pays homage to each decade of Pride and animation studio, Animade, has created a video to accompany the collection which brings the characters and story to life, to be used across social media to support the launch.

NB works frequently with Royal Mail and according to design director, Sam Pittman, the brief was to ‘communicate joy and positivity’. The stamps and video aim to be inclusive of all identities. The vibrant hues work in synergy with the Pride flag and take on a tapestry-like appearance when combined. The full collection includes eight landscape stamps, presentation pack and first day cover.

Australian artists Craig Redman and Karl Maier are famous for their fun, bold, colourful designs. Their latest public work is a nine-hole minigolf installation in Montgomery Square, Canary Wharf where all surfaces, balls and even scorecards are decorated with bright, geometric designs. Craig & Karl are experts at transforming inert spaces and have brought a sense of fun and surprise to the heart of London’s business district with this fully functioning course, open 12-6pm daily throughout the summer and free to play!

Creator of elegant and sometimes humorous graphic design and co-founder of Pentagram, Colin Forbes helped to transform mid-century British design. His best- known work includes a poster for the Campaign Against Museum Admission Charges which took the form of a petition with the painterly signatures of famous artists including Van Gogh and Rembrandt, rather than members of the public. His D&AD logo which apparently compresses three dimensions into two is still in use today and his George Nelson on Design book cover with its overlapping ‘on’ has been much imitated. Forbes also created sophisticated and enduring visual identities for leading corporations including BP and Pirelli. He inspired the trust and respect of leaders of large businesses at a time when graphic design lacked the status in the business world it has today.

Forbes co-founded Pentagram in 1972. With an innovative multi-disciplinary ethos combining graphic designers, architects and industrial designers under the same roof, the group became a powerhouse of the international design scene.