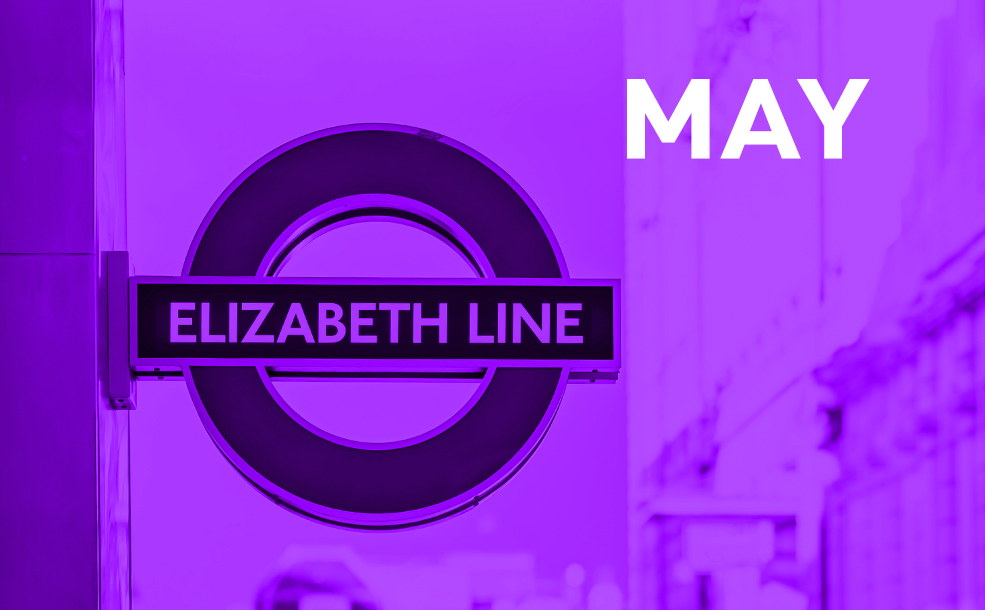 There’s been plenty of interesting branding and design news this month! Here’s a selection of items and happenings that have caught the eyes of the Ingenious team over the last few weeks…

The long-awaited Elizabeth Line opened on 24 May covering over 100km from the west to the east of London. With ten new stations and contemporary carriages, designers have had a crucial role in the line’s development.

The line’s identity is highly recognisable with a core colour palette of Elizabeth Line purple (Pantone 266c) and Transport for London Blue and White, and secondary palette adding Legible London Blue and a magenta tone on signage and wayfinding which uses Johnston 100 typeface, Monotype’s modified version of the typeface used by TfL for over a century. The latest version of the London Tube map was released in early May, featuring the Elizabeth Line for the first time as a double purple line.

Each new station was designed by different architects, all have a distinctive character and artists including Yayoi Kusama and Richard Wright were commissioned to create public artworks. There are platform edge screens, newly designed seating and passenger information is crafted with legibility and accessibility in mind.

70 new trains were designed and built by Bombardier Transportation, with interiors by London design studio Barber and Osgerby. The line’s purple identity is continued in seating upholstery designed by Wallace Sewell, used with contrasting paler tones in a horizontal pattern. And if you really like it, the London Transport Museum has a full merchandise range in the new pattern!

A commemorative rainbow 50p coin has been released by the Royal Mint to celebrate the 50th anniversary of Pride, constituting the UK’s first official LGBTQIA+ coinage. The coins were designed by artist, Dominique Holmes, an east London based writer, activist and artist whose output spans fine art and the tattoo industry. Embedded in rainbows in the same hues as the Rainbow Flag designed by Gilbert Baker in 1978, are Pride in London’s values of Protest, Visibility, Unity and Equality and at the base of the coin is an arrow in colours which represent people of colour and the trans community. This arrow was added to the Rainbow Flag by graphic designer Daniel Quasar and the Progress Pride Flag is now used around the world.

The 50p coins won’t be entering circulation but will be available to purchase from the Royal Mint website this summer, who will make a financial contribution to London LGBT Community Pride to mark their release.

Stompy is a personalised wine subscription service which offers a range of international small farmed wine and matches bottles to individual taste profiles. The name Stompy comes from the art of grape stomping, an integral part of the traditional wine-making process. New York studio &Walsh have designed their playful branding which according to studio founder, Jessica Walsh, aims to challenge the ‘stuffy, snobby stereotypes surrounding wine’. With fun language and visuals, the intention is to make the process of buying wine ‘as easy and fun as drinking it’!

To this end, the studio crafted a series of patterns, animated logo and packaging assets inspired by the ‘motion and repetition of stomping’. 3D type is used for the bold wordmark and copy across the branding and a bright colour palette nods to different types of wines and grapes, with pink for rosé, yellow for white wine and blue for sparkling.

More playful branding, this time for Freetree, a tree-planting app that allows users to plant trees via online shopping purchases. Branding and design agency How&How created a series of organic, animated forms in an effort to cultivate the ‘warm and fuzzy’ feeling you get from a small good deed. Clever use of animation mirrors growth of a forest when users click to make an online purchase and a ‘loud and optimistic’ colour palette of greens with pops of pinks, yellows and oranges suggests foliage in different seasons.

According to creative director Cat How, ‘a lot of climate emergency marketing is bleak’ and they preferred to take a playful approach to create something light, airy and restorative. They also developed a logo which looks like both a cursor and pine tree and which also functions as the Freetree website cursor. Instead of the usual remuneration for their work, How&How asked to be paid in 60,000 trees!

The 21st century’s answer to Photoshopping, deepfakes use a form of AI called deep learning to replace the likeness of one person with another in video and other digital media. Kendrick Lamarr’s latest music video, The Heart Part 5 released earlier this month, sees the artist morph into deepfake versions of Kanye West, OJ Simpson, Will Smith and others. The video is an exercise in creative genius credited to Deep Voodoo, a studio formed by South Park creators, Trey Parker and Matt Stone who wanted to explore the potential of deepfake as an artform.

Notable for its artistic power and urgency, the video was directed by Lamarr and Dave Free and produced by PgLang/Project3, a multi-disciplinary media company co-founded by Lamarr and Free in 2020, which has rolled out some of the most innovative and memorable music videos of the last few years.

The Humour of Heath Robinson exhibition

William Heath Robinson’s sketches of bizarre mechanical inventions and contraptions led to his name earning a dictionary entry and becoming synonymous with the absurdly ingenious and impracticable. This exhibition marks the 150th anniversary of the cartoonist’s birth and celebrates the humour of his work. He trained at Islington School of Art and the Royal Academy School and found fame as an illustrator and comical cartoonist. However, not wanting to be pigeonholed as a cartoonist, he also painted landscapes. His work captures the absurdity of human nature and fondness for bureaucracy and the exhibition is a fitting tribute to a unique illustrator. It runs at the Heath Robinson Museum in Pinner, north west London until 4 September.