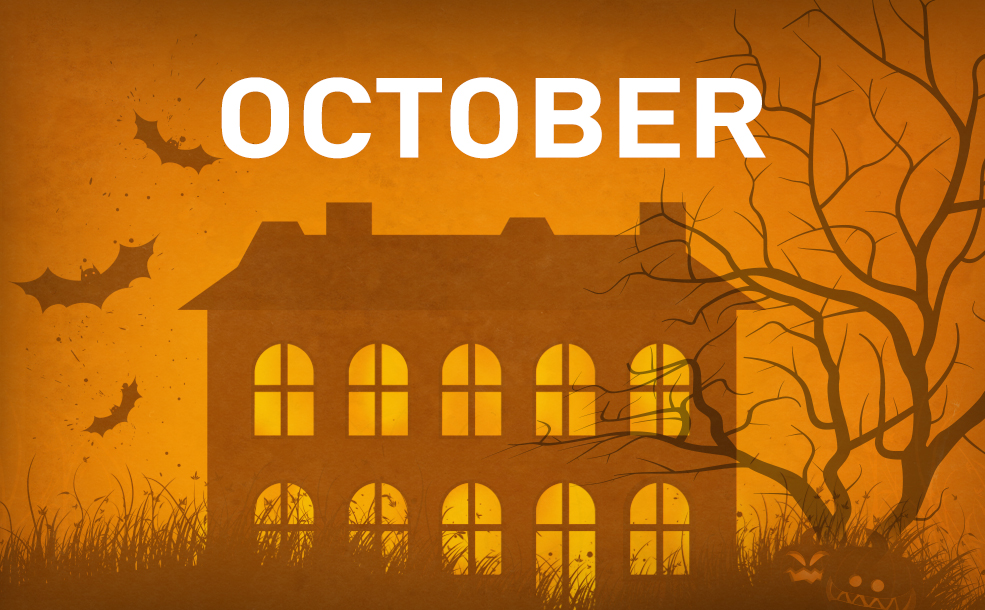 Night at the Museum

The Museums at Night festival starts today and runs over the weekend with museums, galleries and heritage sites across the UK opening their doors for exciting evening and Halloween events and spectacular night-time displays. The festival is run by Culture 24, a charity which supports arts and heritage organisations and helps audiences discover fantastic evening activities at cultural venues. Take a look at their website to discover exciting late-night happenings near you!

October has been Breast Cancer Awareness month and Breast Cancer Now have revealed a new visual identity to coincide with this. Created with brand consultancy Wolff Olins, the new branding features a bespoke handwritten typeface, colour palette and graphics. The new colours (pink, yellow, orange and purple) reflect the scope of the charity’s mission which covers both research and care, and also featured is an “embrace symbol”, demonstrated in the incomplete “o” of the logo, which is open to interpretation and could be seen as a breast, a reassuring embrace, a halo or a symbol representing an individual journey. We love the new identity which continues to raise awareness that breast cancer remains the most common cancer in the UK.

Paris will host the Summer Olympics for the third time in 2024, also the centenary of the Paris 1924 games. The new “Flaming Lips” logo has just been unveiled, designed by Royalties Ecobranding and brings together three iconic symbols: Marianne, the national personification of France, with the Olympic flame forming her hair, while the logo itself resembles an Olympic gold medal. The logo and accompanying typeface were inspired by the Art Deco movement, visible all around Paris on shop fronts and Metro signs.

Logos often try and say too much and reactions have been mixed, with comparisons to the Tinder logo, and some saying it is sexist and more suited to a beauty salon than encapsulating the spirit of the Games. We have to admit, we are less than bowled over!

October 29 was World Stroke Day and Kristina Bold font was released by creative duo Sherwin Teo and Conrad Haddaway in collaboration with Swedish stroke survivor Kristina, whose handwriting was digitised to create the typeface. After suffering a stroke in 2013, Kristina persevered in teaching herself to write again and her efforts were spotted by Haddaway on a handwritten t-shirt which said “Never Give Up”. The typeface appeared on websites and newspapers on World Stroke Day to raise awareness, inspire other stoke victims and convey a message of hope and determination.

This month NASA revealed new inclusive space suit designs to be worn by both women and men on the 2024 Artemis lunar mission which will see the first woman on the moon. The suits have greater flexibility allowing astronauts to walk more easily on the moon’s surface and can withstand temperatures ranging from -150 to 120C, meaning they will also be suitable for use on Mars!

On October 10, Governor of the Bank of England, Mark Carney, unveiled the design of the new £20 note which will be issued next February. Featuring the artist JMW Turner, it is made of polymer and deemed the most secure banknote yet. £20 is our most common and most forged banknote and the new design features two windows and 2-colour foil, making it harder to counterfeit. Turner is the first artist to feature on a banknote, with a self-portrait, image of the Turner Contemporary Gallery in Margate, the artist’s signature and a quote “Light is therefore colour”, referring to the innovative use of light, shade and colour in his work.

An article in The Drum this month debates the changing role of charities. Traditionally charities exist to drive donations which fund solutions for those in need, but as communication channels have evolved technologically in recent years, they are taking on the role of influencers in order to inform, engage and change behaviours and mindsets. According to Jonty Gray, mass engagement director at WaterAid, “Charities as we know them now will disappear and become social purpose brands”. He goes on to say that greater collaboration is required and the agencies that support them need to become more proactive in communicating, educating and changing mindsets in order to change consumer behaviour. Ultimately, all brands will need to have positive social impact and charities have a huge role in driving the necessary changes.

The world’s largest resource of climate change posters can be downloaded for free and used by protestors or shared on social media. The #ProtestByDesign campaign was set up by Glug, a global community of 50,000 creatives, who asked designers to submit posters using humour, colour and typography to make a point or convey a positive message. The database was unveiled to coincide with last month’s Global Climate Strike week but the online resource will be live indefinitely.

Created in 1974 by Professor Erno Rubik to teach his architecture students and launched in 1980, the Rubik’s Cube took the world by storm. An estimated 450 million have been sold globally and appeal to people of all ages and cultures. The beginning of October saw a brand pop-up in Covent Garden providing an interactive experience demonstrating the creative impact of the cube, and included a mosaic of the Queen made from 1,800 limited edition cubes and UK speedcubing champion George Scholey teaching novices how to crack the cube’s code. Next year will see the 40th anniversary of the cube becoming toy of the year during which time it has evolved into a global consumer brand, merchandising and licensing company.