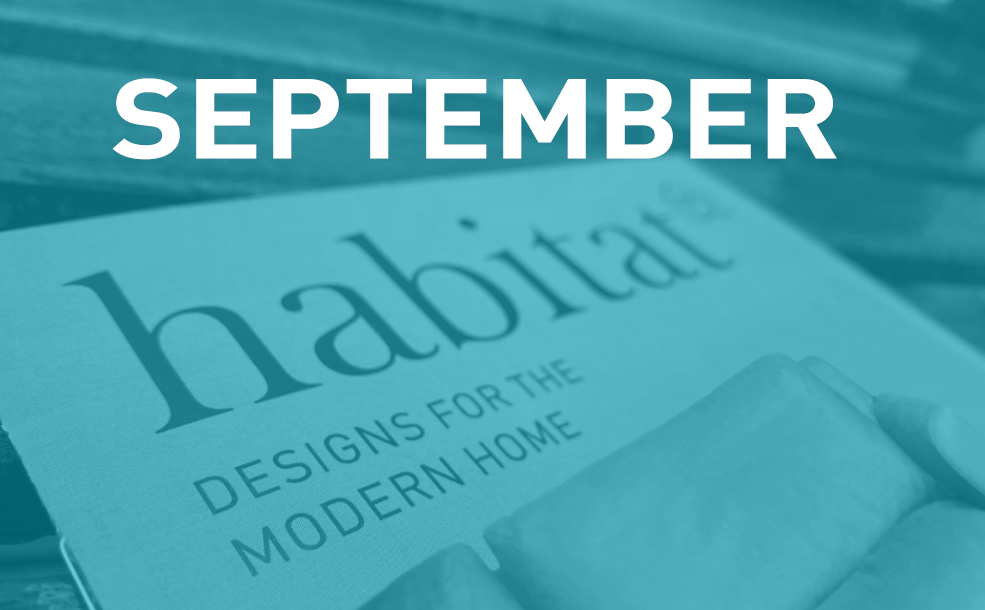 We were sad to learn of Terence Conran’s death earlier this month. Revered by generations of designers and best known as the founder of Habitat, Conran brought modern style and simplicity to UK homes, opened restaurants and later helped to found the Design Museum. The first Habitat store opened on London’s Fulham Road in 1964. Pioneering flat-pack furniture long before Ikea arrived, the company helped to lower prices of cutting-edge designs in a bid to ‘democratise good design’ and revolutionising the way we live by introducing accessible and fashionable furniture, home wares and interiors to all. Heavily influenced by European style, the visionary designer is also credited with introducing duvets to the Great British public!

Designing a school in 15 minutes

Around 100 new and replacement primary schools are needed each year in the UK but the speed and cost of building schools are negatively impacted by ‘structural failings in the construction marketplace’. This is being addressed by Seismic Consortium, a collaborative project working with the Department for Education (DfE) and funded by Innovate UK, which has resulted in an app that can help stakeholders design schools in minutes rather than weeks. School space standards and best practice design rules have been translated into a modular set of blocks embedded into an app that can be configured into a school that complies with DfE standards and drastically reduces the time and cost of initial feasibility and design phases. The app is free, has even been tested with pupils and can be used in a similar way to Lego or Minecraft.

Aircraft manufacturer Airbus has recently revealed three concepts for the world’s first zero-emission commercial aircraft powered by hydrogen combustion instead of jet fuel which could be in service by 2035. Named ZEROe, each concept shows a different approach to achieving zero-emission flights, with passenger numbers between 100 and 200 and flight ranges of between 1000 and 2000 miles. The Airbus designs have the potential to significantly reduce aviation’s climate impact and demonstrate the company’s ambition of leading the way in the decarbonisation of the entire aviation industry.

Citrix delivers digital workspace solutions that help improve employee experience -wherever work needs to get done. According to CEO David Henshall ’30 years ago, Citrix pioneered a radical idea: that office work didn’t have to be constrained to the office – that with the right technology, people could work from anywhere’. Partly due to Covid-19 the world has now caught up with Citrix, who have just updated their brand. The new logo and identity by Athletics and Invencion has been modernised and humanised. The previous logo, memorable for its upside-down second i, has been replaced with a lighter, entirely lower case version where the dot from the second i now sits over the x, anthropomorphising the letter into a human figure to signify the brand’s emphasis on the employee. Ingenious have been using Citrix to assist with home working and we can give a thumbs up to both the new branding and their technology!

Uncle Ben’s Rice has changed its name to Ben’s Original and removed the image of a smiling black man from its packaging, following through on a pledge by owner, Mars Food in June to review the brand amid global protests triggered by the death of George Floyd. Launched in 1947 and best-selling rice in the US for decades, its marketing has been criticised for perpetuating racial stereotypes. As well as changing its name and packaging, the brand is also taking action to enhance inclusion and equity as part of a new brand purpose and Mars is donating $2m towards scholarships for black chefs and investing $2.5m in Greenville, Mississippi, where the rice is made. The new packaging is due to reach shops in 2021.

Cert. is a new cleaning product from Hydrochem, a British company which provides disinfectants to hospitals. They have just launched their first direct-to-consumer product in response to the pandemic which uses dissolvable tablets and a re-usable spray bottle. When a tablet is added to 500ml of water, it creates a disinfectant which destroys the virus that causes COVID-19 in 60 seconds. London-based agency, Free the Birds, created the identity and packaging in just three weeks. The name Cert. was inspired by the words ‘certainty’ and ‘certified’ and appears in a clean circle with germ particles round the edge, which says Paul Domenent of Free the Birds, represents ‘a simple, authoritative zone of certainty’. The blue colour palette was chosen for its associations with hygiene and freshness.