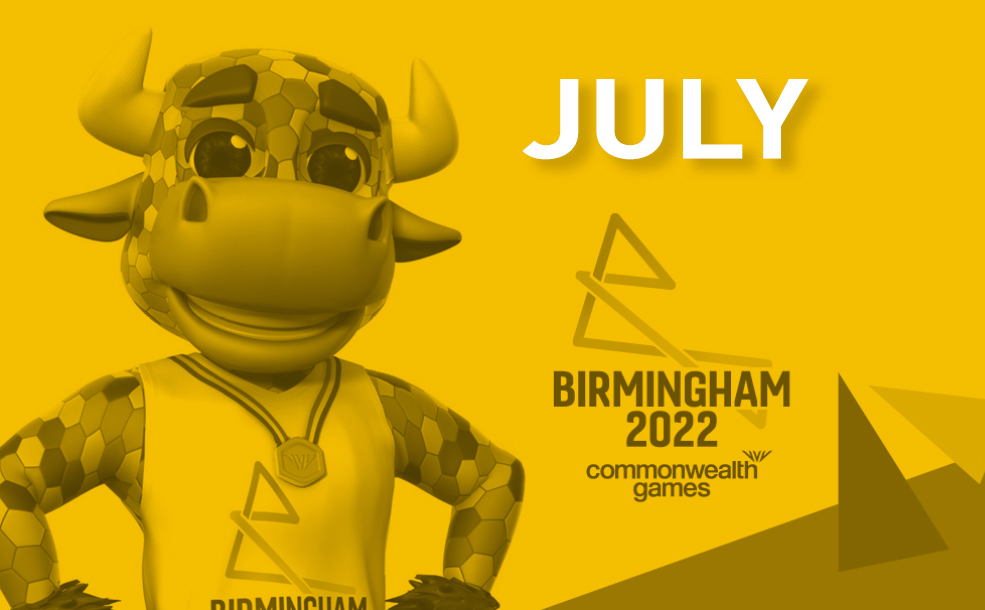 As always, there’s been plenty of interesting design and branding news over the last month! Here’s a selection of items and happenings that have caught the eyes of the Ingenious team over the last few weeks…

The Birmingham 2022 Commonwealth Games run from 28 July until 8 August and branding underpins a vision to create a ‘Games for everyone’. The blue and yellow logo is a unique B shape which visually connects communities from ten key locations across the region, many of which will be hosting events. The vision and rationale for the branding came from in-depth consultation with local communities to ‘co-create something that is bold and dynamic, just like the region itself’ says Josie Stevens, Chief Marketing and Communications Officer for Birmingham 2022. A bespoke Games font has also been crafted from the influence of the people and places of the region and is characterised by variations in height, angle and width, irregular alignment and spacing.

10-year-old Emma Lou won a competition to design the Commonwealth Games 2022 mascot. ‘Perry the Bull’ references Birmingham’s famous Bullring and is covered in colourful hexagons, which according to Emma are ‘the strongest shape and the whole world depends on each other’.

A set of 8 striking commemorative stamps have also been designed by Interabang for Royal Mail featuring dynamic geometric illustrations of various sports in a vivid colour palette.

New data from the Design Council reveals that the design industry contributed £97.4 billion in gross value added (GVA) to the UK economy in 2019. The Design Economy Report researched by the Design Council and a range of additional sources provides in-depth info on the state of design in the UK. The total represents 4.9% of the total UK GVA and constitutes a rise of 73% from 2010 GVA – twice the rate of the UK economy’s growth as a whole over the same period. 1 in 20 workers (1.97 million people) are employed in the design industry, with London the largest contributor to GVA and the South-East in second place. Digital design, including design of apps and video games as well as digital production, has grown by 138% since 2010 and is encouraging growth in other UK regions.

It’s not all good news though. The Design Council says that while the growth is welcome, it needs to be supported by ‘green and equitable prosperity’ and adds that the long-term impacts of Covid are not yet known. Although the industry is flourishing, there is a lack of diversity with 85% of digital designers being male, 77% of designers across the industry as a whole are male, and female and ethnic minority backgrounds under-represented at senior and management levels. There is also concern that ‘design skills pipelines are at risk’ due to a decline in Design & Technology GCSE’s.

Bulletproof studio has modernised Toblerone’s visual identity, introducing bright hues of colour and a bespoke archive-inspired typeface. Creative officer Nick Rees says the ‘timeless colour staples of the brand’ have been retained, so the classic cream, red, black and gold still make up the primary colour palette but ‘exciting and punchy hints of teal, orange and magenta’ have been brought in to give the ‘modernity we required’.

The studio drew on the past for inspiration with a trawl through the archives which influenced a change to the wordmark and creation of a flowing typeface called Tobler. The rebrand covers the consumer experience from physical to digital touchpoints and attempts to embrace Toblerone’s ‘rich and quirky past’ while leaving behind its more dated elements.

A rebrand for Twinings by Butterfly Cannon targets a younger audience with new packaging drawing on themes of travel and featuring an updated colour palette and illustrations. Across all ranges the circular window on the front of their box is split into two, with one side depicting ingredients and the other referencing either the country which the blends and flavours relate to or illustrating more traditional aspects of the brand with iconography based on its history.

The wordmark has been straightened up to modernise its look and according to Butterfly Cannon co-founder Jon Danes, the colour palette and typeface library have been reinvigorated, with a bold and vibrant two-tone palette on the packs in complementary hues which relate to the flavour and blend. The new brand assets have been amplified across all Twinings communications to ensure it has a harmonious and recognisable identity.

We were excited to hear the announcement just over a month ago that the Turner Prize 2023 will be presented at nearby Towner Eastbourne as the centrepiece of the Towner’s centenary celebrations. Established in 1984, the Turner Prize became one of the world’s best-known prizes for visual arts and aims to promote public debate around new developments in contemporary British art. It is presented to a British artist for an outstanding exhibition of their work in the previous 12 months.

Works by the four shortlisted artists will be shown at Towner from 28 September 2023 until 14 January 2024 with the winner announced on 5 December 2023. But you don’t need to wait until then to visit the gallery which runs great exhibitions all year round and is situated on the seafront at Eastbourne – perfect for a summer day out!

Following the huge success of Van Gogh Alive, Mexican Geniuses: A Frida and Diego Immersive Experience is now showing at Surrey Quays in London. The 360-degree digital experience comprises giant screens, virtual reality and sound to help lose yourself in iconic works by the feminist icon Frida Kahlo and her husband Diego Rivera, who were both revolutionary painters in Mexico during the first half of the 20th century. The exhibition is a bright and vivid celebration of their work and Mexican culture with the organisers aiming to ‘democratise art and culture for all’.