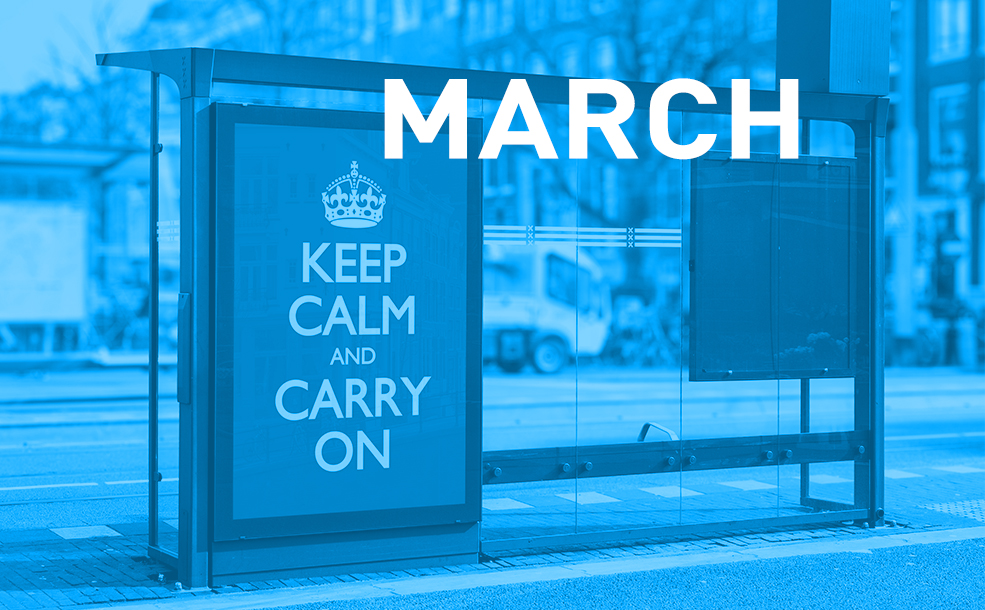 Well-known brands have a crucial role to play in reinforcing efforts to slow the spread of Coronavirus. They can use their own tone of voice in sincere and informed ways to help audiences understand that staying at home can save lives.

Some of our favourites are: the Nike advert “If you ever dreamed of playing for millions around the world, now is your chance. Play inside, play for the world”; Coca Cola’s iconic billboard in Times Square: “Staying apart is the best way to stay united” and Time Out’s rebrand to Time In with a focus on supporting local businesses, providing inspiration during the lockdown, reporting news and new initiatives.

We also love St Luke’s simple but powerful reversal of the NHS logo to SHN, reinforcing the message to Stay Home Now, and One Minute Brief’s slogan “Keep Calm and Carry One (Basket)” to combat panic buying. Respect is also due to drinks firm BrewDog, now making hand sanitiser at its Aberdeen distillery.

Graphic Designers do their bit

Graphic designers often employ creative ways to change people’s mindsets and have been using powerful and often comic images and animations to raise awareness of Covid-19 symptoms and convey the importance of social distancing and self-isolation. Last week, the United Nations published an open brief to creatives, asking for help “translating critical public health messages into different languages, different cultures, communities and platforms, reaching everyone, everywhere”. The industry’s gift for mass messaging has arguably never been more important or needed than it is right now.

New forms of entertainment and education are springing up everywhere to help people through this difficult period of isolation. We particularly like the look of the following:

Although London’s cultural institutions have closed their doors to the public, there is an incredible range of virtual tours available of the capital’s museums, galleries and historic buildings. For example, you can view online collections of the British Museum, Courtauld Institute, Houses of Parliament, National Gallery, National History Museum, Royal Academy and RAF Museum to name a few. And if that isn’t enough, you can venture further afield to the Van Gogh Museum in Amsterdam and the Museum of Modern Art in New York.

Filmmaker Gary Hustwit, famed for Helvetica, Objectified, Urbanized and Rams, is streaming his documentaries on a weekly basis via Oh You Pretty Things. The series began with Helvetica (17-24 March), which explores the typeface in graphic design and typography and includes interviews with industry leaders to look at how it has been assimilated into our everyday lives.

The artist and “national treasure” Grayson Perry will be taking viewers through the principles of drawing, painting and sculpture in a new Channel 4 show, Grayson’s Art Club. With a focus on accessibility, the programme will encourage work about self-isolation, with plans for an exhibition when the pandemic is over which will give a snapshot of the experiences of normal people in abnormal times.

Polaroid has gone through various incarnations since it stopped making cameras and instant film in 2008 when everyone started taking photos with smartphones. In response to the subsequent revival in instant photography another company, The Impossible Project, started making cameras and film based on the Polaroid model. In 2017 they bought rights to the Polaroid name and became Polaroid Originals. They are now renaming again as Polaroid and merging with the original company which still exists! The latest rebrand coincides with the launch of a new camera, the Polaroid Now. The cool new look retains the iconic colour spectrum from the original Polaroid branding as well as the original typography, FF Real, and in our opinion successfully achieves their aim of “celebrating the Polaroid heritage, while keeping their sights set on the future.”

Clandestine illustrations have been hidden by cartographers in maps published by the Swiss Federal Office of Topography (Swisstopo). Switzerland has a rigorous tradition of map making where the mandate is to “reconstitute reality” and there is (supposedly) no place for creativity. However, in spite of meticulous proofreading, drawings hidden amongst the contours of more remote regions have slipped through and if you look carefully you may find a marmot, spider, fish, hiker or naked woman, in what some see as an unofficial and somewhat transgressive Swiss tradition!

According to Holly Kielty, Director of Storytelling at Design Bridge, brands need to stop ignoring women over 50. Largely overlooked in advertising, design and the corporate world, women this age are healthier, more knowledgeable, influential and wealthier than ever before and account for 27% of all consumer spending. Brands should therefore take notice of this powerful demographic and start engaging with them in a more positive way. A great example of a brand doing just this is This Works, who changed the name of a skincare range from No Wrinkles to My Wrinkles, focusing on a positive rather than negative anti-ageing message and showing that ageing is something to be embraced rather than feared. No names mentioned, but the Ingenious office includes one or two women of this generation – and we say bring it on!