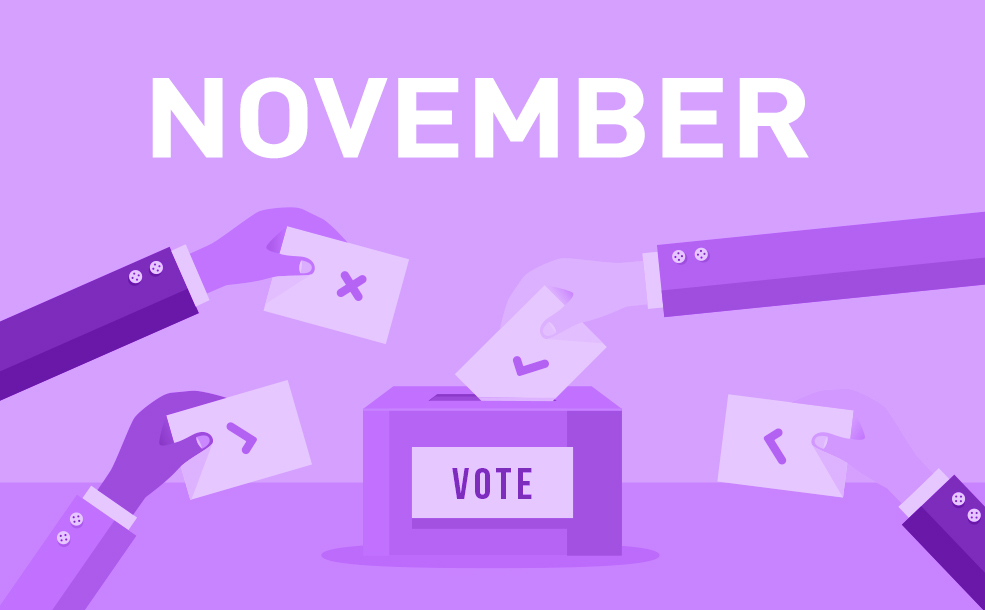 Love it or hate it you can’t ignore it! Design Week carried an interesting article last week about which of the main parties are using design most effectively in their election campaigns. In no particular order, here’s a brief description of each:

The Lib Dems use a ‘bird of liberty’ emblem with amber and black branding and distinctive diamond-shaped posters. The campaign identity carries a strong anti-Brexit message and employs colours from the other main parties – perhaps indicating they are trying to appeal to other voters, as well as playing to a more youthful point of view.

Labour’s red dominates all their branding material and the rose in their logo was designed in the 1980’s by Michael Wolff. A red filter is applied to full-length black and white photos of Jeremy Corbyn, creating a look reminiscent of times when it was too expensive to print in full colour, thus avoiding an image which appears too commercial or slick.

The Tory logo is a stylised scribble of an oak tree which can also take the form of a Union Jack and has been used since 2006. The campaign focuses on Boris Johnson as leader, often referring to him on first name terms, and the tagline ‘Get Brexit Done’ is used frequently, which, although not very imaginative, can be seen as a functional and effective tactic.

The Green Party green is Pantone 368 which together with white is used consistently across all their branding. The logo, a globe inside sunflower petals, comes across as quite gentle and perhaps lacking in passion when compared to the strong design and branding employed by Extinction Rebellion earlier this year.

The Brexit Party was formed in January 2019 and the previous purple and yellow party colours have been replaced with light blue. In a clever piece of graphic design the arrow-shaped logo, encompassing the party name in block capitals, will stand out on a ballot paper, pointing directly at the box where they want you to mark your vote.

The SNP has always stuck to a simple formula for its logo which combines the Saltire – cross of the Scottish flag – with the thistle, national flower of Scotland. Used with shades of yellow against black and seen everywhere in Scotland, it conveys a strong, direct message which gets the point across.

Irrespective of your views, which designs do you think work best?!

Third Sector, leading publication for the charity and voluntary sectors, released its Charity Brand Index 2019, compiled in partnership with market research company, Harris Interactive. Nearly 4,000 people were asked which charities they are most aware of, whether they trust them and which ones they are most likely to donate to.

Cancer Research UK retained its top spot, despite the controversy caused earlier in the year linking obesity to cancer, demonstrating that charities can get away with taking risks! Macmillan Cancer Support came a close second, followed by the British Heart Foundation and the RSPCA. Age UK was one of the biggest climbers, moving up 18 places to number 10 on the list. Oxfam also jumped 22 places to 35th on the list, getting back on track after the safeguarding crisis of last year.

The list underlines the fact that charities with the biggest budgets, who are able to consistently advertise and promote their work, remain in the front of people’s minds.

These days, the start of the festive season is marked as much by the John Lewis Christmas ad as by the opening of an advent calendar! Arguably the most anticipated ad of the year, the 2019 advert features “Excitable Edgar”, a dragon whose enthusiasm for Christmas accidentally ruins some celebrations. With help from his friend Ava, the story has a happy ending as Edgar uses his fiery breath to light a Christmas pudding. Created by Simon Lloyd, directed by Blink’s Dougal Wilson and with post-production by Untold Studios, this year sees the first joint campaign from John Lewis & Partners and Waitrose & Partners, no doubt saving money at a time when profits are under pressure.

Other Christmas ads to check out include M&S Go Jumpers, TK Maxx Gift Different and WWF Adopt a Better Future.

Two giants of media rebranding, Pentagram and Wolff Olins have been employed by Warner Brothers and Warner Media respectively to refresh their logos and brands.

Pentagram have given a sleek and clean update to the Warner Brother’s shield logo, which has been elongated using the ‘golden ratio’ principle, with redrawn letters in a new, brighter blue. The aim was to create a more contemporary shape that provides consistency whilst reflecting the company’s wide-ranging programmes and divisions, and to be adaptable to the diverse ways people consume Warner Brother’s programming, from cinema, to streaming services and mobile.

Global media and entertainment conglomerate, Warner Media, includes iconic brands such as HBO, CNN, TNT and Warner Brothers. Wolff Olins have recently created their new, dynamic visual identity with the mission of unifying employees and stakeholders. Inspired equally by both Warner Media’s heritage and future, the colourways and kinetic motion of the ‘WM’ invoke classic Hollywood as well as screen-based tech space and bring together the distinctive and well-loved brands under the Warner Media umbrella.

Marking the 30th anniversary of the fall of the Berlin Wall in November 1989, letterforms graffitied by artists and activists on the wall have been made into a typeface as a warning that ‘division is freedom’s biggest threat’. The ‘Voice of the Wall’ typeface has been created by Heimat Berlin for non-profit art association, The Cultural Heirs, and is free to use as an online tool for people to make their own statements of freedom on social media, and which will be collected into a book and sent to world leaders.

Less auspicious perhaps is the creation of Quid Pro Sans by Rick Banks and international agency, Jones Knowles Ritchie, which lets you type in the giant felt tip handwriting used by Donald Trump in notes for a recent press statement. Photos of the notes went viral on social media, have been put to music in countless memes and the new typeface, which includes multiple versions of the same letter – inconsistent, erratic and always in uppercase, – is now available for use online or to download.

This year has been a year of protest, activism and calls to action for social and environmental change, but a recent article in Campaign illustrates that it is not enough to simply talk about the change you want to see – brands must also follow through with actions.

Unilever chief exec, Alan Jope, has criticised the practice of ‘woke washing’ where brands use the imagery and language of good causes to increase sales without backing them up by actions. Examples called out include Boohoo’s ‘For the Future’ campaign with the strapline ‘Dress well and do your bit for the planet’ sitting uncomfortably with a reputation for fast, unsustainable fashion and £4 dresses on their website. Also criticised is the M&S LGBT sandwich which was launched to mark this year’s Pride festival and led to the term ‘Rainbow-washing’, with the glossy rainbow packaging and surface-level nature of the campaign bearing no inherent link to LGBT+ people.

Brand purpose is a powerful agent for delivering business growth but must be backed up with genuine substance, action and authenticity, such as Oatly’s ‘Ditch milk’ campaign, which takes a bold stance in the name of protecting the environment, whilst also growing sales.

Finally, if you are into cars, the V&A’s new exhibition, Cars: Accelerating the Modern World is the place for you! Looking at the history of the car as a design object and exploring the machine’s history and future, the show features some fabulous cars, both old and new, dynamic audio-visuals and a striking set design with signposting and lighting mimicking a city bisected by a highway-like structure. References to the damaging effects on the environment and exploration of alternatives and solutions result in a good balance between the positives and negatives of the car as a major contributor to the climate crisis, against its undeniable use to society. The exhibition runs from 23 November 2019 to 19 April 2020.