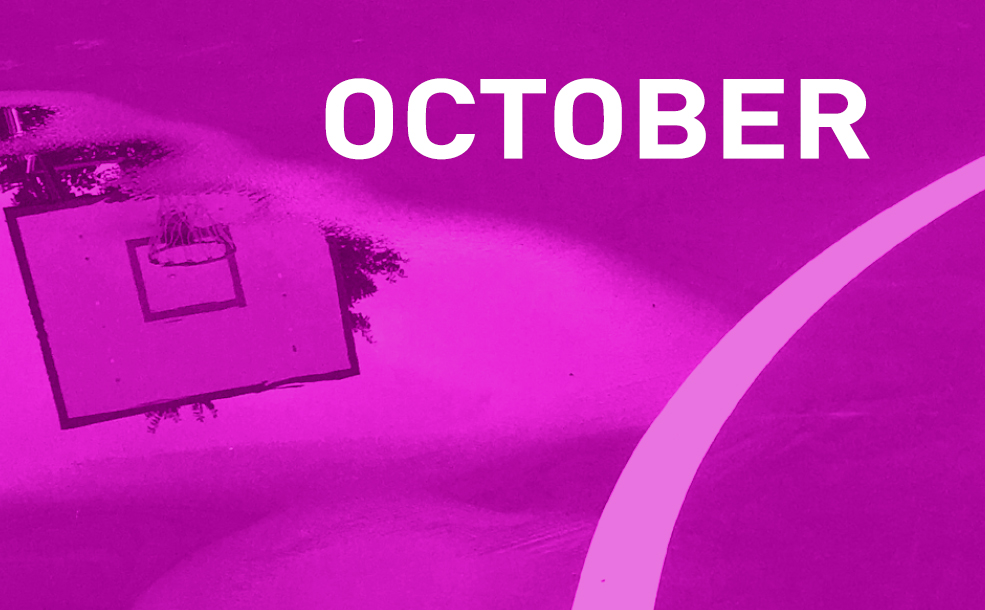 Basketball is a popular but underfunded sport in the UK and graphic designer Gareth Roberts is giving it a boost! A player turned designer and founder of Project in the Paint, Roberts has created a series of ‘art courts’ where surfaces are repaired and painted with eye-catching designs to attract new players. His first court was crowdfunded but he is now advising local councils on similar projects which have been offered funding. According to Roberts, the sport is well suited to imaginative designs as the ‘clothing and culture around basketball is really vibrant and artistic’.
One of the UK’s first art courts was designed by Lois O’Hara in Brighton. Inspired by Project Backboard, an American organisation which revamps courts in the US, she wanted to make courts into safer spaces for the local community and her signature style incorporates colourful curves and organic shapes conducive to gameplay. However, it is obviously important not to interfere with the lines on the court or distract players too much!

The Euro 2024 identity has just been revealed by creative agency VMLY&R for the 17th edition of the football tournament to be hosted for the third time in Germany. Crafted with inclusivity in mind, it includes a flag-inspired logo, launch video and bespoke typeface. The aim was for the identity to represent ‘Euro diversity united in Germany’ and the visual language reflects the ‘real-life variety and diversity’ of fans. The new logo comprises six colours taken from all fifty five member associations’ flags and its oval shape is inspired by Berlin’s Olympiastadion as seen from above. The ten host cities are represented by recognisable monuments from each and graphic patterns illustrate geometric elements of the game including lines on the pitch, goal nets, ball and jerseys. The bespoke typeface was inspired by the alphabets of Europe and the overriding message is all about inclusivity – everyone is welcome!

Earlier this year the England and Wales Cricket Board (ECB) launched a new tournament, The Hundred, in a bid to attract younger and more diverse audiences. The fast-paced 100-ball format involving eight men’s and women’s teams attracted lots of new followers and the branding for the event by FutureBrand London reflected the dynamic new approach to the game. According to creative director, Danielle Smith, the aim was to ‘disrupt people’s preconceptions or expectations of what cricket was’. Last week brand identities for the eight teams were launched and in-keeping with the overall theme, colours are loud and fonts bold. With team names including Northern Superchargers, Southern Brave and Welsh Fire and shirt sponsors such as KP, Pombear and Butterkist, the new movement may be alienating traditional cricket fans but will surely succeed in its mission to attract new and younger fans!

New logos for the BBC

A redesigned visual identity launched on 20 October includes a modern makeover for the BBC logo and updates for channels and services including iPlayer and Sounds, with further changes to come. In a collaboration between BBC’s in-house teams and Wolff Olins, the new simplified designs are an attempt to modernise the BBC’s image after audience research revealed the previous look was ‘old fashioned and out of date’.
The updated logo uses the BBC-owned font, Reith, named after the Beeb’s founder John Reith, and replaces the previous logo which used Gill Sans. The letters sit slightly further apart and are incorporated into each of the BBC channels. Services such as iPlayer, Sounds, News, Sport, Weather and Bitesize also have a new look comprising three simple graphic shapes configured differently in various colour combinations. The updated colours, logos and graphics aim to ‘identify each service and improve navigation between them’ says Kerris Bright, BBC’s chief customer officer.

Unboxed: Creativity in the UK

October has seen the official launch of Unboxed Festival, originally commissioned by Theresa May’s government with a working title of Festival 2022. With an ambitious programme of live and digital events across the UK between March and October next year, the festival will draw on the arts, science, engineering, technology and maths in a government-backed £120 million celebration of ingenuity. Ten ambitious projects have been chosen from a shortlist of 30 to form a ‘once-in-a-lifetime extravaganza’ according to Martin Green, chief creative officer, who was also head of ceremonies at the London 2012 Olympics. All events will be free and the festival aims to bring people together, benefitting students and young people in particular, and create jobs and educational and development opportunities throughout the UK.

The Conran Effect, a free exhibition at the Design Museum celebrates the life and work of its founder, Terence Conran, to mark what would have been his 90th birthday. Retailer, entrepreneur, restauranteur, Conran ran businesses, wrote books, worked with architects and property developers but always described himself as a designer first and foremost. The exhibition looks back at his many achievements including the establishment of Habitat and showcases his ideas that reshaped design in Britain and revolutionised everyday life.

Beano: The Art of Breaking Rules has just opened at Somerset House in London and brings together original material from the ever-popular and irreverent comic together with contemporary artworks by ‘rule-breaking artists’. It is a homage to and exploration of the world of the Beano which first appeared in 1938 and is still going strong, and its influence on art and popular culture. The exhibition is all about railing against authority and curator Andy Holden sees this anarchic wilfulness and disobedience as the keys to creativity.